Donald Trump and His Full Head of Hair

Not a fan of the man, but have been intrigued by that head of hair for minute. Couldn’t help but whip this up for you guys. hope you enjoy. 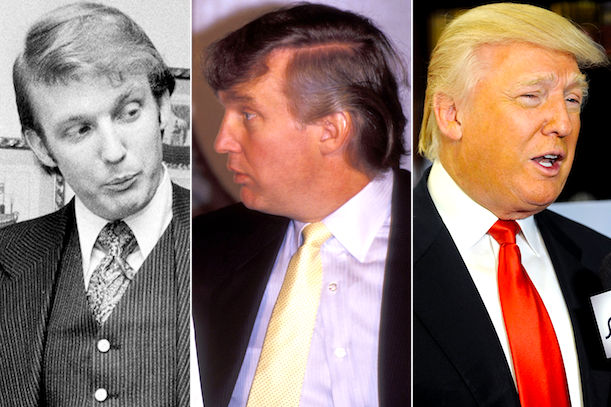 Presidential scandals are nothing new. President Clinton gave us the interesting deflection to a question about his affair with Monica Lewinsky by responding “It depends upon what the meaning of the word “is”, is”. President Obama had people speculating about his birth certificate and if he had really been born in the United States and Richard Nixon stunned America by resigning his presidency after the Watergate break-ins. While President Donald Trump is only into his first year as our president, he has rocked many a boat already. There’s the government shutdown, the border wall, and his relationship with Russia, just to name a few. While these legitimate topics may truly be the legacy of Trump’s presidency, it could just as easily be “Hair-Gate”; the on-going drama regarding the hairstyle and the authenticity of the hair of our 45th president. The question we should be asking is “does he need a hair transplant?”

While increasingly pressing issues to plague our country—potential nuclear war, anyone?—the speculation about whether “The Donald’s” hair is real still makes the news. The guy has been around in the public eye since the 1980’s—with the same hairstyle, no less, yet his hair is STILL a topic of discussion. Many people ponder that if the man is a billionaire, as he so claims, can’t he get a better hairstyle? If he is wearing a toupee, as some speculate, did he pick it up at a half price rug sale? And not only has the style and legitimacy of the hair itself come into question, but the ever-changing color of his hair is also a hot topic. He’s been a brunette, blond, redhead and even invented a few colors of his own, but the coif has remained the same. Does he have several wigs in various shades? Inquiring minds want to know.

For a man who has proven his ego drives his every move, it is interesting that he is so steadfastly clings to the hairstyle that everyone else agrees is hideous. It’s as if he is going to prove the rest of us wrong by maintaining a questionable hairstyle just to antagonize the masses; as if cutting off your nose to spite your face is “winning”. Then again, in the chess game of life, no one is ever going to accuse him of backing down, even when popular opinion begs that he do so, which may bode well for us in other, more important issues that face our country. This could be a great tool; or the end of all existence. If it’s the latter, the only thing left on Earth with the cockroaches will be Donald Trump’s hair!


The “Trump comb-over”, as it is affectionately called by some, features a shelf of hair on top of his head, similar to a diving board. In one huge swoop of hair, it covers the top of his head and goes to the nape of his neck, which must mean the hair itself must be 3 feet long to swoop and cover both the back and the front. He apparently combs it forward and then combs it all the way back and is a firm believer that hairspray cures all bad hair days. Although his hair may look like he is covering baldness or might even be a toupee, he adamantly swears that it is truly all his hair. He has even taken to having people touch it or mess it up to confirm that it is all his. Jimmy Fallon, Megyn Kelly, and Larry King have all had this honor and all confirm that they believe the hair to be his. He has been interviewed countless times about his hair—how he styles it, what he uses to wash it, does he blow dry it—the nagging questions that plague our society. He is on to one thing—anything that gets your name in the news, regardless of whether it is good or bad, it is still publicity, and he thrives on publicity. Even though his hairdo had been universally panned and much has been said about its natural state, he can just brush off whatever he does not like by referring to it as “fake news”.

Hair Transplant Or Not?

In addition to the speculation that Trump’s hair is not his own is that the hair IS his, it is just a series of hair transplantation surgeries, a claim that he also denies. Many hairstylists and transplant experts swear that they can see the tell-tale “tracks” where hair is taken from the back of his head and moved to the front of his head and that he has even had rare and costly “microcylinder intervention” hair transplantation procedure and routinely undergoes additional treatments to maintain his full head of hair. Once again, this is vehemently denied by the commander-in-chief, as if going bald and doing something about it makes him appear less virile. Noticeably, too, is that the color has morphed, as well, from a light brown to a sandy blond, to a ruddy red to his current color of gray on the sides and a light ginger color on top. He doesn’t deny coloring his hair, even though he might if he thought he could ruffle some feathers by denying that he does. Some say he has tried scalp reduction to solve his hair problems, but still nobody seems to really know. 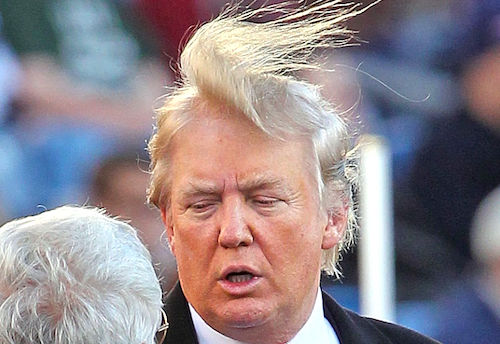 Possibly the best part about Donald Trump’s hair is that it is so easy to mock and that doing so had become a national pastime. Trump’s hair has been immortalized in the hashtag campaign of trumpyourcat, where folks fashion their cats’ hair in homage—or mockery—of the president’s coif. There are also countless websites comparing Trump’s hair to various other likenesses, including a very well-behaved guinea pig, the hair of 33 Barbie dolls or a troll doll. Its color and “texture” have been called a patriotic shade of amber waves of grain, cigarette stained-teeth blond and featuring more fly-a-ways than LAX airport and more soft-serve swirl than Dairy Queen. Got to give it to Americans and our ingenuity!

Obviously, people need to concern themselves with the issues that truly matter and that are affecting our country but Trump’s hair has certainly provided a distraction. Coincidence or perfectly executed plan by the Trumpster?