The world is Frick’n disaster, humanity is constantly disappointing me and while there are some really good people doing really good things, there are plenty of A-Holes doing A-Hole things. So many of the biggest catastrophes in history were created by man, from atomic bombs and wars, to the world trade centers. Humanity can be awesome, and it can suck at the same time. Here are some things that have gone on in history that were caused by our fellow upright walking humans. It’s easier to say looking back on these events that they all could have been prevented, especially the structural failures. We know some guys in OKC (https://tcdexpert.com/) that own a construction defect inspection company, they do this for a living. This stuff can be prevented! Enjoy the read though, it’s tragic, but interesting.

Disaster can strike at any time, and being prepared is often what saves lives. However, when the disaster is man-made, preparation may not be possible. Despite our best efforts, human beings make errors, and sometimes those errors cost lives. From collapsing buildings to crumbling bridges, commercial construction disasters occur all too frequently.

The most recent disaster was a bridge collapse in Florida, on the campus of Florida International University (FIU). The pedestrian bridge, collapsed and trapped several cars, killing six people. One of the bridge’s main structures was changed, causing the project to fall behind schedule and millions of dollars over budget. Cracks were found two days before the collapse by an engineer, and the investigation that followed by the National Transportation Safety Board noted that the day of the collapse that a stress test was being conducted. Cars were crushed under the weight of the bridge; six people were killed.

Another major catastrophe involved a suspension bridge that connected West Virginia and Ohio. In 1967, the Silver Bridge, named for its silver paint, collapsed during rush hour traffic, killing 46 people. It was determined that the then-50-year old bridge had a tiny defect in a suspension chain, and that the bridge had been supporting loads heavier than it was initially built to hold. After the Silver Bridge collapsed it was replaced by The Silver Memorial Bridge, named to honor the lives of the people lost in the bridge disaster.

August 1, 2007 was the date the I-35W Highway Bridge in Minneapolis, Minnesota failed, killing 13 and injuring over 100. The bridge, built over the Mississippi River, was undergoing construction work on the day a portion of it collapsed, falling over 100 feet into the river below. Thankfully, four of the eight lanes on the bridge were closed due to the construction, otherwise, the death toll might have been even worse. One hundred eleven vehicles were involved in the collapse and seventeen were pulled from the river. The disaster was attributed to a design flaw.

Not all man-made disasters involve bridges. In 1978, at the site of a cooling station being built at a power station in Willow Island, West Virginia, fifty-one construction workers were killed. Concrete was being hoisted up the tower using a new processed that had not been given the engineering okay. The concrete, along with wood and metal, came crashing down on the scaffolding holding the workers; they all died in the fall. 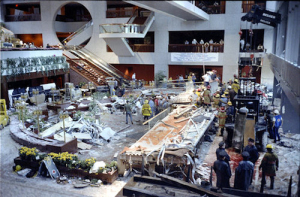 A dance at a Hyatt Regency Hotel in Kansas City, Missouri, turned into a catastrophe, costing 114 people their lives, and injuring another 200. Folks had gathered at the hotel for a dance contest when the structure collapsed, trapping people under the concrete. The suspended walkway’s beam wasn’t built to support the weight of hundreds of people, causing the disaster. Back in the early 1980’s this was the largest construction disaster at the time.

Twenty-eight construction workers were killed while working on a 16-story residential building in Bridgeport, Connecticut when the partially built structure collapsed. A method called lift-slab technique was used where slabs of concrete are lifted on settled on the floors above; the concrete slabs, hoisted by a hydraulic lift, slipped, and the entire building came down trapping the workers.

Baseball fans were not expecting disaster to strike during a day at the ballfield, but unfortunately, 12 people lost their lives and 200 plus were injured when the bleachers at Baker Bowl, the first home of the Philadelphia Phillies, collapsed. The makeshift bleachers were erected after a fire destroyed the original set. To ensure there would be seating for fans when the Phillies returned from a road trip, the stands were hastily built. Two men started an altercation which drew the attention of more fans, and the weight of the additional people caused the bleachers to buckle.

The St. Francis Dam was a structure built to house a reservoir just above Los Angeles, basically where the city of Santa Clarita stands today. Built between 1924 and 1926, the dam failed in 1928, killing approximately 400 people with its floodwaters. An investigation followed, it was determined the dam had defective foundations, causing it to crack, crumble, and eventually give way.

While the United States has had many terrible accidents but none has been as devastating as the collapse of the Savar Building in Bangladesh in 2013. The building was a garment factory, as well as a bank, other businesses and apartments. Cracks were found in the building and the owners chose to ignore the problem; garment workers were ordered to show for work even though the warning was given that the building was unstable. Even though the other businesses and apartments had been evacuated, the garment workers were threatened with docked pay if they did not show up for work. The building collapsed killing over 1100 people. In addition to substandard building materials, the structure had three extra floors that were not permitted, causing the building to crack under the undue pressure.


Of all the disasters that could have been avoided, the failure of the Banqiao Reservoir Dam in a Chinese providence is the most destructive and catastrophic of them all. Built in the 1950’s, a series of dams were built on the River Ru to control flooding and to harness electrical energy. Typhoon Nina roared into the area in 1975 and the dams were not equipped to receive the amount of rainfall that accompanied the storm. Evacuation notices were not relayed to people, due to downed communication lines, so when the series of dams subsequently failed, the water rushed down, killing thousands. It was estimated that a six-mile wide wall of water, approximately nine feet tall and travelling at speeds of 30 miles an hour, came crashing down on unprepared villages. In all, over 117,000 people died from the flooding, disease and famine created by the catastrophe.

While structures made by human beings are never disaster proof, oftentimes, the structures fail as a result of humans taking shortcuts to save time or money. Sometimes, they are haphazardly built, causing fundamental issues that will eventually lead to disastrous consequences—the loss of human life.