Fun At The Waste Management Open

Quick update on the open, we aren’t the biggest golf fans but when there is a party as big as this around a sport  we typically find time to become fans! We got a group together for the 2018 Waste Management Open and we were not disappointed. We took a Lyft there and

back and started with some drinks in the AM to get the party started. My girlfriends and I bought some cute golf outfits that included these cute little golf tops and skirts. We were ready to party at one of Arizona’s biggest sporting events. With spring training just a month away, this is when the spring season really kicks off. The weather is to die for, and the people that turn out for this event show up in droves and ready to party their arses off! The actual game was cool to watch in person, although I don’t know all the rules I do understand the basic concept behind golf. The gotta hit the golf ball all the way down the grass lane and eventually land it in the hole. Driving a ball down the lane and landing it in a hole… ok, that sounds like something I can be a fan of. There was a drunk guy there though before the event really kicked off that ended up streaking out onto the course. There was some much fun to be had, but unfortunately there was also a very tragic moment that I want to mention. There was a Tempe firefighter killed by a young man with a gun late in the evening on the streets of Scottsdale. 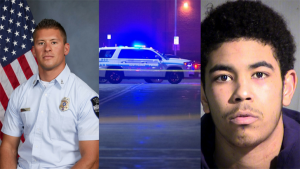 Apparently the firefighter was a passenger in a Golf Cart that was driving around Old Town Scottsdale and a vehicle was getting dangerously close to them, driving close to the bumper and swerving near them. The cart came to a store and the firefighter exited the golf cart to approach the car and a young man fired a gun shot into the firefighters face killing him. It’s an extremely sad story, my best friends husband was in the Marines with this guy and they came out from San Diego to attend the funeral this past week. So, with all the fun and excitement that surrounded the event, there was also that tragic event that unfolded. All said and done it was an absolute blast and I will be doing it again in 2019.