Quartz Natural Crystals In Your Home And Life

Me and my husband have chosen to use Quartz countertops throughout our home during the remodel. We had a few options including granite but ultimately decided to go with quartz because of the price and it was just so beautiful. As I was digging around the internet looking for information about quartz I stumbled upon so many interesting things that I was unaware of. There are some mystic powers believed to surround quartz crystals, which is always an intriguing thought. There is jewelry and every day items around the home that are made up of quartz. Unless you have taken a geology class, you may not know one rock from another. But the more you get to know about the different types of rocks and what they can do, you will learn that not all rocks are created equally. Some elements are denser than others, and some are softer, and more pliable. Stones and rocks have many uses, and some are quite beautiful. Quartz is a hard crystalline (hexagonal-shaped) mineral that is not only aesthetically pleasing, but has many uses as well. So here are a few things I found during my search that I thought I would share here on my blog. Enjoy!

Whats Is Quartz Made Of

Quartz is comprised of both silicon and oxygen atoms and is the second most abundant mineral found in the Earth’s continental crust, and it comes in many varieties. On the Mohs scale of hardness, with one being soft and ten being the hardest, quartz locks in at a 7. A diamond is a ten, for measure. In its purest form, many quartz rocks are referred to as “rock crystal”. The Ancient Greeks referred to rock crystals as “icy cold” because a few philosophers thought that the stone was super-cooled ice, like its appearance suggests. While rock crystal is colorless and translucent, that isn’t so of other quartz stone. Determining quartz when you see it might be a challenge, as there are many different types and colors of quartz. There are colorless quartz versions, some that are pink, like rose quartz, or purple, like amethyst, or even brown and gray opaque quartz, known as smoky quartz. Several of the varieties are considered semi-precious stones and are sold as jewelry or as hardstone carvings.

Some of the most popular quartz varieties used for jewelry include rose quartz, which takes on a pinkish hue, due to added iron, manganese or titanium found in the quartz. Amethyst, another popular gemstone, takes on a purple color when the quartz mineral is mixed with iron. Smoky quartz can be brown, gray or even black caused by natural irradiation that releases the silicon inside the quartz. While most quartz jewelry is made with natural stones, there are synthetic versions made to inject colors that would not normally be natural to the quartz mineral. Clear quartz crystals are subjected to a heat treatment or gamma-irradiation, which forms different colors based on the location from which it is mined.

Synthetic quartz crystals have long been used in high-end

Quartz crystals are also known for their mystical powers. The piezoelectricity property of quartz also magnifies energy, making clear quartz known for their healing powers. Crystal quartz is said to provide mental clarity, to aid concentration, and help with memory retention. It is also the crystal used to help people sleep, helping them to comprehend the messages sent to us during a dream state. Many people use quartz crystals to meditate or even communicate with their spiritual guides, but its properties are said to work only if the person is truly a believer it the stone’s mystical qualities. The person using the stone must also have the best intentions; the rock is said to bring harm to someone who does not have pure intentions regarding its use. Believers carry a quartz crystal on them so they are able to touch it whenever they need a spirit boost and it can be used to filter out negative energy from other sources. By providing an invisible force field, the crystals are said to cancel out the energy of harmful forces. Many fortune tellers use crystal balls made out of quartz or made up of some quartz and other materials. In some cultures, quartz is a highly respected stone used in funeral rites or placed in tombs. Used as a passage tomb in Newgrange, located in County Meath, Ireland, the quartz wall at the entrance is hailed as an architectural wonder.

Quartz In The Home 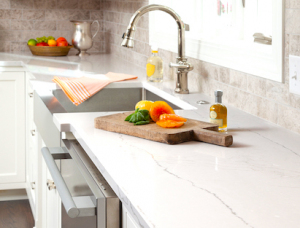 While quartz may have many specialized uses, it also is a substance used in everyday homes. Quartz is known to withstand pressure and weathering, which makes may be why it has been gaining popularity in recent years as the successor to granite countertops as the choice du jour. Over the past fifty years, Quartz countertops have gained significance as a quality surface material, adding a touch of luxury to bathrooms and kitchens. Since it is pressed into sheets, there are few imperfections, making it a highly desired countertop alternative.  Quartz, unlike granite, does not need sealing to ensure it doesn’t crack; the natural resins that bind the stone materials made up to comprise the quartz holds it together and strengthens it at the same time. Also, if granite is nicked or scratched, bacteria can build up, whereas quartz is non-porous and can withstand pesky germs. When mixed with the resins, these sheets of quartz are heat-resistant, scratch resistant and stain resistant, making them a perfect workspace for a kitchen. Since color can be added to the material, quartz countertops can come in an array of colors. Depending upon what you want and how much you need, the cost to counter your kitchen and your bathroom could get pricey. While it is a commonly found material, the manufacturing cost brings up the price.

Quartz is an all-purpose material that can be used in a variety of ways. It can be broken down into tiny particles, it can be chucked off into small crystalline pieces, or compressed with other substances to create slabs. From its uses in timekeeping, to its mystical properties to its beauty and resiliency in the kitchen, quartz is a miraculous material. Quartz is part of our everyday life, even if we don’t even realize it!